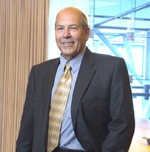 With the recent sudden and untimely passing of Ralph McGinn, WorkSafeBC not only lost an extremely knowledgeable and committed Chair of its Board of Directors, but many lost a personal friend, and our country and the world has lost a foremost leader who made improving workplace health and safety a life-long priority, all the while leading his professional efforts through a very collaborative and personal engagement style which led to many lasting friendships.

In addition to all his tangible and lasting OS&H achievements, Ralph also thoroughly understood the value and importance of effective Return to Work and Disability Management programs, the positive impact that effective policies, programs and practices in these areas could have on the economic, social and psychological well-being of injured and disabled workers while at the same time reducing costs to employers and society at large. Ralph’s larger than life impact can perhaps be best explained through comments from a small cross section of the many individuals who made their voices heard.

To view the full Communiqué, please click on the following link:
More Information 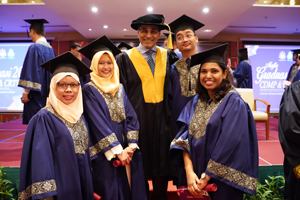 A graduation event was held in Kuala Lumpur, Malaysia in early March at which 80 participants were honoured who achieved the Certified Disability Management Professional (CDMP) and the Certified Return to Work Coordinator (CRTWC) professional designations for this year, and including 38 who were re-certified. SOCSO, the social security organization of Malaysia, now has 143 CDMP and CRTWC practitioners.

A launch of the Malay language version of the Book on Disability Management Module also took place at the graduation ceremony. This book, published in collaboration with the Social Wellbeing Research Centre at the Universiti Malaya, will be a source of reference for many, especially employers, hospitals and other public agencies. It is one of SOCSO’s initiatives to spearhead disability management by offering training and examinations to disability management practitioners from the Southeast Asian region in addition to those in Malaysia.

For further details and to view the graduation photos, please click on the following link to view the Communiqué. More Information

In fond memory of and tribute to our friend, Hartmut Haines, former Ministerial Director for disability issues for the German Ministry of Labour and Social Affairs who, starting in 1990 until his retirement in 2007, and informally beyond that, was a personal friend and a tremendous supporter and champion of not only better outcomes for persons with disabilities, but also for the concept of Disability Management and of the establishment of NIDMAR in 1994.

NIDMAR fondly recognized his major contribution to us and our collective vision with the presentation of an “International Contribution Award” which took place during the first International Forum on Disability Management – IFDM 2002 – presented by the Chair of NIDMAR’s International Advisory Council, the Hon. David Vickers, who was then a Judge of the Supreme Court of British Columbia.

IFDM 2002 became a significant success, in part through the contributions made by many individuals from around the world, but also the collective and very personal leadership by the Hon. Claudette Bradshaw, who was Canada’s Minister of Labour, and her German counterpart, Walter Riester. The great collaboration between the Ministers became a reality through the personal commitment and professional collaboration between Hartmut Haines on the German side and Warren Edmondson, who was then Assistant Deputy Minister of Labour for Claudette Bradshaw.

Hartmut Haines brought vision, leadership and practical support for our efforts in not only establishing NIDMAR, but building it into a highly collaborative employer, union, government and other relevant stakeholder governed and driven Global Center of Excellence in more effective Return to Work / Disability Management policy/program and practice outcomes, manifested itself through his direct support of many of our key initiatives spanning almost 20 years and proudly reflected on by NIDMAR’s founding employer and labour co-chairs, who were joined on stage by Hartmut during the official opening ceremonies of the NIDMAR offices in 1994, presided over by the Hon. Dan Miller, then Minister of Labour and Deputy Premier, and who later became Premier of British Columbia, Canada.

“So sorry to hear of Hartmut’s passing. He was a solid supporter of our initiative, always more than willing to share his views and experiences. He made himself available to contribute and help move our project forward. Great guy, we all owe a debt of gratitude.”
Brian Payne, Founding Labour Co-Chair and former President of the Communications, Energy and Paperworkers Union of Canada

“Sad to hear of Hartmut’s passing. When I think of Hartmut the following phrases come to mind:
1) Towering intellect
2) Soft spoken humour
3) Relentless focus and support for the betterment of life and work for people with disabilities
4) Bigger than life”
Peter Lawrie, Founding Employer Co-Chair and former Director of Industrial Relations for MacMillan Bloedel.

“His invaluable contribution to our collective efforts will always be remembered and much appreciated.”
Wolfgang Zimmermann, Executive Director, NIDMAR

The following URL is a link to NIDMAR’s 2002 Annual Report where the views of Hartmut Haines and his enduring vision are profiled in detail:
http://www.nidmar.ca/news/news_annual_reports/reports/NIDMAR_AR2002.pdf

Every year since 1991, on April 28 we recognize workers who died as a result of a workplace injury and illness, through a wide range of events supported through unions, employers and governments.

As a result of the current COVID-19 pandemic and the restriction on public events, we are recognizing and paying tribute to workers who died and/or became disabled through work related injuries/illnesses, virtually through video and online messages.

The most recent statistics from the Association of Workers’ Compensation Boards of Canada (AWCBC) tell us that in 2018, 1,027 workplace fatalities were recorded in Canada, an increase of 76 from the previous year. Among these deaths were 27 young workers aged 15-24.

Add to these fatalities the 264,438 accepted claims (an increase from 251,508 the previous year) for lost time due to a work-related injury or disease, including 33,058 from workers aged 15-24, and the fact that these statistics only include what is reported and accepted by the workers compensation boards, there is no doubt that the total number of workers impacted is even greater.

And it’s not just these numbers on which we need to reflect. With each worker tragedy there are loved ones, family members, friends and co-workers who are directly affected, left behind, and deeply impacted – their lives also forever changed. (Source: Canadian Center for Occupational Health & Safety)

Every day, people die as a result of occupational accidents or work-related diseases – more than 2.78 million deaths per year or in excess of 7,600/day. Additionally, there are some 374 million non-fatal work-related injuries each year, resulting in more than 4 days of absences from work. ( Source: ILO )

The latest statistics on workplace fatalities and injuries from the AWCBC paints a very grim picture and should be concerning to all Canadians. In addition to the 1,027 fatalities, there were more than 260,000 injured on the job. Both these numbers are significant increases from the previous year. We also know that these numbers don’t reflect the reality of workplace death as there are many diseases that workers suffer from that are all too often not categorized as occupational in nature though they likely are.

“An often overlooked and tragic fact is that of those thousands of injured workers, about ten percent of them, will suffer a permanent condition of some sort. People with disabilities in Canada face many barriers with regard to employment and this just adds to a physical injury with mental health concerns and often social isolation.

Canadian workers deserve better and the United Steelworkers have made it a priority since our inception to fight for safer and healthier workplaces. We have fought for a place in society for those who have suffered life altering disabilities. On this Day of Mourning we reiterate our commitment to Mourn for the Dead and Fight for the Living.”

This is a last chance to submit your abstract! So far we’ve received many abstracts but we are hoping for more! Don’t miss the deadline of April 20th. If you hesitate to share an abstract with us now, it will be too late. Please send it to us now!

All information about the call for abstracts and submission is available following this link: https://www.ifdm2020.org/call-for-abstracts 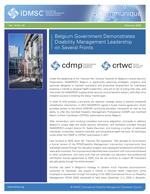 Belgium’s Social Security Organization, INAMI/RIZIV, is advancing strategies, programs and practices designed to maintain successful and productive employment for individuals who acquire a mental or physical health impairment and who are at risk of losing their jobs and who often never re-enter the labour market again. The shift has been towards a pro-active job retention strategy versus waiting for re-integration measures attempted once individuals enter the social security system.

In 2014 INAMI/RIZIV signed a 5-year license agreement which provides access to the entire NIDMAR continuing education framework as well as the ability to offer the Certified Disability Management Professional (CDMP) and Certified Return to Work Coordinator (CRTWC) examinations across Belgium.

Following a formal review of the RTW/DM intervention improvements that individuals trained through the education program and subsequent professional certification were able to achieve in Belgium – the improvements being consistent with the outcomes achieved in other jurisdictions – Belgium has extended the license agreements for education and professional certification license arrangements to 2025.  More Information 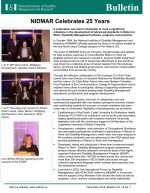 An event was held in Vancouver on December 2 to recognize and celebrate NIDMAR’s 25 Years of developing and implementing professional and program standards in the field of Disability Management and Return to Work.

Speaking at the event were the Honourable Shane Simpson, BC’s Minister for Social Development and Poverty Reduction; MP for Courtenay-Alberni, Gord Johns; international guests from Germany, Belgium and the United Kingdom; and founding and current NIDMAR Co-Chairs. A presentation was also made on the Enhanced Disability Management Program (EDMP) re the joint collaboration between the unions and the employers across the health care sector in BC.

For further information regarding the event and the various initiatives that NIDMAR has successfully undertaken over the last 25 years, please see details in the bulletin attached – highlights are:

– Development, validation, and promotion of Occupational Standards in Disability Management, and the associated professional certification examinations, now adopted in 64 countries and referenced in the ISSA global best practice guidelines on Return to Work and Reintegration

– Developed, tested and validated a three-level consensus-based Disability Management / Return to Work program assessment protocol – the basis for which was used to create the EDMP in the health care sector in BC.

– Creation of the biennial international congress – the International Forum on Disability Management – NIDMAR hosted the first IFDM in 2002, and brought it back to Vancouver in 2018 hosted by PCU-WHS following successful IFDMs hosted around the world in the intervening years.

Two events were recently held in Canada – one in British Columbia and one in Ontario – for the presentation of CDMP and CRTWC certificates, and 10-year pins to those who have maintained their professional designations for 10 years.

The Honourable Harry Bains, BC’s Minister of Labour, attended the event in Burnaby, BC and said of the event, “It was wonderful to be a part of a celebration for graduates of the Certified Disability Management Professional (CDMP) certificate program at the BC Nurses’ Union. BC’s professional network to support injured workers to return to work just got a little bigger.”

A second event was held in Toronto during the Conference hosted by the Canadian Society of Professionals in Disability Management (CSPDM) when the CDMP and CRTWC certificates and 10-Year Pins were presented by IDMSC Co-Chair Prof. Dr. Joachim Breuer and Chair of the CSPDM Evie DoCouto who is Vice President, Return-to-Work Program at the Workplace Safety and Insurance Board of Ontario.

Please see the attached Communiqué for quotes from the main speakers at the events along with photos. More Information 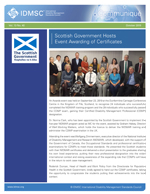 An Awards event was held September 23 at the Dunfermline Carnegie Conference Centre in the Kingdom of Fife, Scotland, to recognise 24 individuals who successfully completed the NIDMAR training program and the 29 individuals who successfully passed the CDMP examination, gaining their CDMP designation. For further details, please click on the following link to read the IDMSC Communiqué.